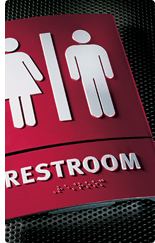 Earlier this week, the U.S. Department of Justice announced the signing of the final regulations revising ADA guidelines, including ADA Standards for Accessible Design. This announcement represents the long-awaited adoption of the 2004 ADAAG and its impact on architectural and ADA signage. If you have been in the signage industry for any length of time, you’ll know that we were regulated at the federal level by the ADA (Americans with Disabilities Act of 1990 (42 U.S.C. 12181).  Specifically, Title III – Public Accommodations, affects signage.  It prohibits discrimination on the basis of disability and requires places of public accommodation and commercial facilities to be
designed and constructed for accessibility by handicapped individuals.  For our area of expertise, this primarily affects raised copy and Braille requirements on signage and specific mounting heights for legibility. In 2004 the ANSI A117 Committee made recommendations to the Department of Justice to update the original standards.  Finally, these recommendations have been signed into law.

Now that the announcement has been made by the DOJ, what happens next?

The new regulations will be known as the 2010 ADA Standards for Accessible  Design, which encompass the 2004 ADAAG including signage. The details of the new standards must still be entered and published in the Federal Register, and all effective dates are based on the publishing date in the Federal Register. The new standards will take effect 6 months after the publishing date in the Federal Register, in which compliance will be permitted but not required.Compliance of the new 2010 standards will be required 18 months after the date of publication in the Federal Register, and at that time will apply to new construction and alterations. A general “Safe Harbor” is also specified, “…under which elements in covered facilities that were built or altered in compliance with the 1991 Standards would not be required to be brought into compliance with the 2010 Standards until the elements were subject to a planned alteration”. Although more detailed information is expected, the initial DOJ announcement information and related documents can be found at:

ASI has been a leader in providing ADA Update classes to architects and designers to help create a better understanding of how the ADA impacts the design, production and installation of signage.  Our class explains the differences between the 1990 regulations and the newly updated standards. ASI is an AIA Continuing Education provider and we offer a variety of classes related to signage and wayfinding.  If you would like a “lunch and learn” for your organization, please click here.

ASI has a long history of providing architectural signage and[...]

How Building Information Modeling (BIM) and Wayfinding Can Work Together

Building information modeling (BIM), a method used during the design[...]

Graphic Design in Signage – who would have thunk it?

When I studied for my Associates Degree in Graphic Design[...]