We read the post from “The Hot Word” blog site from Dictionary.com titled, “Do funky fonts actually help you remember?” and felt that it was intriguing because architectural signage professionals and environmental graphic designers work so hard to make written messages easy to read and understand using ADA guidelines and recommendations.

“In 1999, two graphic designers from Indianapolis raised a stir when they tried to discourage the use of Comic Sans MS, the silly-looking font designed by Vincent Connare and modeled after the text in American comic books. The designers observed that a font is the orthographic (written) equivalent of one’s tone of voice, and that Comic Sans was essentially like a squeaky-helium voice but in text. Flash forward to 2011 and a recent study from Princeton University that suggests ‘funky fonts’ such as the aforementioned typeface as well as Bodoni MT may in fact boost learning and long-term retention of information.”

Here are examples of the fonts mentioned in the study. 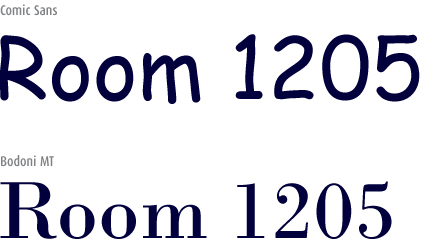 What is interesting is how the article talks about “the brain having to work harder to understand the written word due to the funky font used.” By contrast, for ADA signage, we are looking for short messages being read and understood quickly because people are usually in motion when they are reading the sign. Therefore, the idea is to use easy to read fonts for short messages to reduce eye strain and provide optimal message comprehension for a broad audience. The use of pictograms or symbols is also key to ensuring messages are understood on signs.

What will be interesting is how designers move forward with the new message option for the recently adopted ADA guidelines. Who will be the first to make use of the tone-on-tone raised letters and the non-tactile message? How far will designers push the choice of fonts for the non-tactile message? If you have examples of signage that pushes the font-usage boundary that you’d like to share, send them to us and we’ll post them.

Sometimes, it's just fun to look at how routed letters[...]

Studies on wayfinding and gender suggest that differences exist in[...]