Universities and colleges often spend millions of dollars in branding campaigns, particularly in the lead-up to a major capital fundraising effort. Typically the process is painstaking and can take years of planning, discussions, experimentation, surveys, focus groups, and countless meetings. For a brand to be sustainable and fulfill its purpose of establishing an institution’s reputation, its development and evolution must involve everyone on campus and even beyond, from the lowest-paid receptionist to the smallest donor and oldest alumnus.

Too often, though, institutions neglect the powerful role that architectural signage can play in extending that brand. Some may believe that signage simply tells people where to go or what a building houses; others may assume that simply slapping a logo and maybe using the same font on a facility’s exterior sign lettering fulfills the branding purpose. Still others may not consider it a top priority, particularly if it’s a rebranding campaign. The latter usually means new signs everywhere, both internally and externally. It’s much easier and cheaper to order new letterhead and business cards than to replace campus signage.

Still, a branding campaign that isn’t reflected on the most visible part of a university’s identity – its buildings, classrooms, auditoriums, stadiums, and other facilities – not only wastes much of the work, time and money invested in the creation of the brand itself, but also will ultimately fail to achieve the whole purpose of a campaign: to raise awareness of the new brand and reinforce the values and promise implicit behind it.

For example, the distinctive Texas A&M University logo is familiar to millions, even if they’ve never been anywhere near the institution’s flagship campus in College Station, Texas. They may know it from its powerhouse football team, its stellar academic reputation, its passionate and fiercely loyal alumni, its unique campus traditions, or perhaps all of the above. Standing front and center as a symbol of that singular culture is its simple yet memorable logo. The Texas A&M brand is so intimately linked to the reputation and traditions of the university itself that, like many colleges and universities, it has a detailed brand guide that covers everything from stationery to the specific fonts that must be used in certain instances.

Can you imagine stepping foot on any A&M campus and not seeing that proud logo on a sign? Or worse – perhaps seeing a different color shade than the custom-inked Pantone Aggie Maroon?

To ensure a brand campaign’s success and strengthen a university’s position in an increasingly competitive market, it’s critical that the institution’s exterior and interior signage solutions all reflect its brand image. Many modern campuses sprawl well beyond their original boundaries, particularly those located in large cities and suburbs, so it’s even more important that visitors, staff, faculty, and students all be able to immediately identify a campus-affiliated facility, no matter where it’s located. Interior signage can accomplish the same thing on a smaller scale, whether it involves digital signage, modular templates, or even directories. 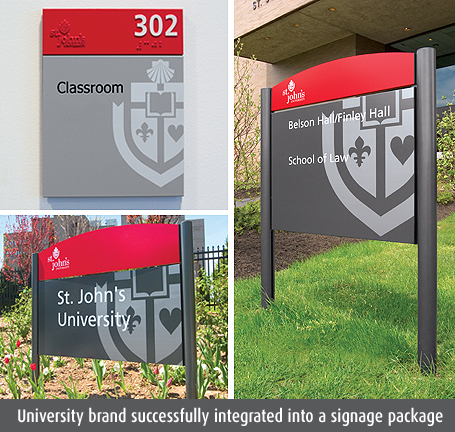 One great example of a university branding campaign that needed a visible and effective wayfinding solution that complemented the campus’ new image is that of St. John’s University in New York. The university is well known for its excellent academic programs, historic traditions and vibrant cultural community, and the administrators wanted their signage to reflect all of that. ASI worked closely with St. John’s facilities and design staff to create an extensive collection of interior and exterior signage that not only served a practical wayfinding solution but also highlighted the university’s exclusive brand.

A university’s brand is too valuable an asset not to use to maintain its prestige and integrity. Signage solutions, especially those developed in conjunction with the branding campaign, are the ideal tools to showcase that brand and the special culture it exemplifies.

I recently attended a meeting at an enormous convention resort[...]

Creating curb appeal for retail businesses with attractive and professional[...]