California has long been known as being on the cutting edge in many areas – from industry, technology, politics, education, entertainment, etc. As we all know, sometimes California rides that edge to prosperity and glory and sometimes Californians slip on that edge and hurt themselves pretty badly. With that in mind, let’s consider the bold, cutting-edge case of the Los Angeles City Council’s unanimous vote (12-0) to create a special one-block signage district in downtown Los Angeles. The reason for the district is to allow for 10-floors of the soon-to-be rebuilt 45-story Wilshire Grand Hotel and the attached 65-story office tower to have huge digital signage or video boards on the facade.

In addition, the tops of the building will have digital signage instead of traditional channel letters and logos to advertise the building’s tenants.

It does not stop there. In addition, several floors of the façade of each building will have LED-lit panels displaying motion graphics of decorative imagery (local flora, Southern California features, etc.) designed to enhance the architectural appearance of the building.

L.A. councilman Ed Reyes said the digital signage and lighting on the buildings within the special district should be viewed as works of art that will add to the culture of the area, and that the digital signage will not be like digital billboards people see along the freeways. For more information on this case, click here to read the Los Angeles Times story. 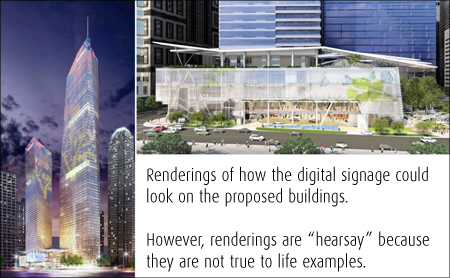 Decorative architectural features have always been around — from the custom chrome plated “hood ornaments” that adorn the facade of the Chrysler Building to the cast images on concrete tilt-walls of new bridges and highways to the old-fashion Victorian era décor maintained on historic courthouses across the country. These exterior digital signs really are nothing more than another form of architectural decorative features and the local communities have the right to set standards for such features.

What this comes down to is communication with the community and setting tasteful content standards. We agree with the citizens that turning the 10-story digital signs into billboard-like advertisements is not the way to go. However, environmental graphic designers are very talented people who take a great deal of pride in creating designs that add to the surroundings instead of distracting or degrading the appearance. Let’s give them a chance – because as everyone knows, when it comes to California riding the cutting edge of public finances, they slipped and fell and put themselves in critical condition – and they can use all the opportunities to earn revenue that they can get…and as for distracting drivers, well, let’s tackle that matter once you’ve succeeded in prying cell phones and coffee cups out of their hands.

How is the Extreme Heat Affecting your Exterior Signage?

Having lived through the infamous summer of 1980 in the[...]

Windsor Park is an Illinois area retirement community that provides[...]