Exciting New Technology Could Make “Hablo Espanol?” a Thing of the Past in the Signage World

Home UncategorizedExciting New Technology Could Make “Hablo Espanol?” a Thing of the Past in the Signage World

Exciting New Technology Could Make “Hablo Espanol?” a Thing of the Past in the Signage World

One of the largest barriers facing designers and suppliers of architectural signage in the United States is creating effective wayfinding solutions that reach every person that encounters an interior or exterior sign. Pictograms and multilingual messages are currently the best answer to the question of how to reach English as second language speakers and even the functionally illiterate (see recent posts on these topics: Communicating with the Functionally Illiterate in Public Spaces and Pictograms are Crucial for ADA Signage — Make Sure They Work)

So, what if we told you there was a magical device that you could wave at a sign and it would give you a translation in the language you read and write? No, we are not talking about a Babel fish (hat tip to Hitchhiker’s Guide fans) or a communicator/translator from Star Trek. We are talking about Word Lens, a new application that runs on your mobile device that allows you to use your camera phone to look at signs and get a word for word translation…currently in Spanish only…but maybe soon in many other languages as well. 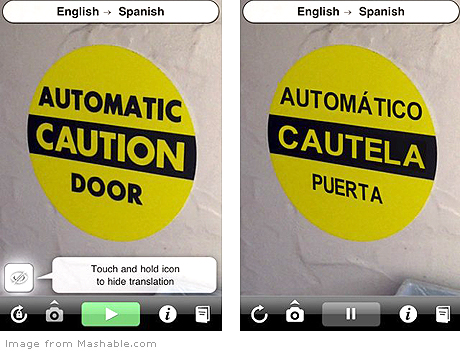 In a recent post on mashable.com by Jennifer Van Grove titled, “How One Impressive Mobile App Plans to Overcome Language Barriers,” the WordLens application is detailed.

Because Word Lens is a tech product, it will continue to evolve to meet the demands of its users. However, what will be interesting to watch is how Word Lens handles dialects and variations of Spanish and even English. We all know that the English spoken in the U.S. is not identical to the English spoken in Australia. We can understand each other — sometimes — but accents and local dialects can sometimes impede true understanding. The exact same thing can be said about Spanish language speakers in the southwest U.S. when compared to Argentina, for example.

We think the biggest challenge will be Mandarin to English translations. Let us know what you think about this innovation.

What are wayfinding committees? Can they be beneficial for health[...]

We wanted to recognize and congratulate ASI, Detroit for landing[...]