Now that summer has arrived, let’s talk about solar power. Solar is booming industry, with an expected growth of the world PV market jumping from $46.3 billion to $96.8 billion in 2014. Visit this report by solar buzz for more details.

With great examples of public applications all around, most noted by many is the integration of solar panels on school zone traffic signs.  This application is creating good change, to name a few:

It’s appears the education market is a leader in solar installations, where stories of districts switching to solar power is gaining ground. Here is a quick read on San Diego schools installing over 23,000 solar modules to generate power for 20 sites. Stories continue to support the long known fact that going green can save you green (cash) in the long run.  It’s the upfront investment that prolongs several applications from being implemented under this year’s budget.

The Solar boom can also be attributed to reduced costs based on demand, along with government incentives and mandates.  For example, the Department of Defense has ordered all branches of the military to consume 25 percent of their energy from renewable sources by 2025.  Read more on this article by Adam Bosch of the Times Herald-Record. 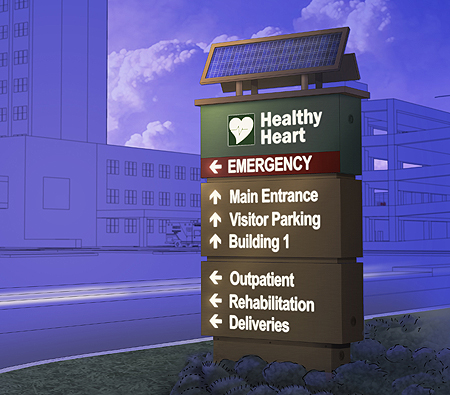 Exterior Signage is no exception when considering how to cut electricity and installation costs, even prove ROI.  While solar has been integrated with signage for a few years more commonly, we anticipate demand will grow as more facilities utilize solar power and need to install new signs.  Also, as government incentives continue to offset costs, the increased demand will only drive down material costs.  We have seen a growing interest in solar-powered exterior signage; however the utilization is not as high as we anticipated at this time. We attribute that to budget constraints due to the economy and project influencers who are not ready to go solar.  Read more about options for illumination exterior signage of our blog.

It is clear, solar power can change the way we implement exterior signage in the future, where trenching may be a thing of the past or rarely done. Similar to the way business professional operated before SmartPhone’s existed – vacations were took with minimal interruptions and meetings had everyone’s full attention!

We wanted to recognize and congratulate ASI, Detroit for landing[...]

Signs of the Future: Will Digital Signage Go the Way of the 8-Track Player?