In some built environments, there’s a place where architecture and typography meet. There are innovative ways to incorporate architectural signage into the structure of a facility, and when the signs become inseparable from a building’s architecture, you’re left wondering, is it architectural signage, or it it building design? Obvious examples of this topic can be seen in a recent blog post titled “Architectural Signage Transforms How the Public Interacts with Building.” 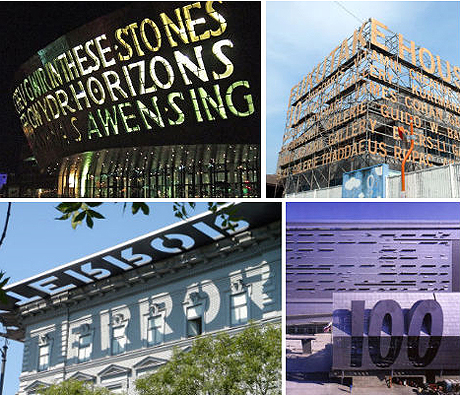 The novelty of these design techniques works to promote and reinforce the messages of the signage in the minds of people who patronize such facilities.

Signage can be worked into the architecture of a building such that it functions as structural support. A prime example would be signage whose typography doubles as an array of columns that support a portion of a building that extends over an open region, such as a parking area. Architectural signage which functions as support for a building pulls dual duty, providing essentials for the facility’s structure while also making a powerful visual impact.

Typography on a Building’s Facade

All kinds of possibilities exist for incorporating typography on a building’s facade. The characters can be made larger-than-life, functioning both as textually informative for visitors and as an important design element of the building’s appearance. Lettering can also be used to impactful effect by wrapping it around the perimeter of buildings. Typography used on building facades becomes a design factor in itself, an integral component that works with and enhances the architectural look and feel of the building. Signage can indeed be an art form when it’s tastefully used in this way. Check out the Agave Library project case study for a breath-taking example of how typography can be integrated into the structure of a building.

Another way signage can become part of a building’s design is through the use of embedded signage. Signage can be embedded in the structure of a building, making it look like it’s part and parcel of the design. The signage components can be tucked inside structural components such as support beams through which the lettering can be easily read. Embedded signage is particularly good at grabbing people’s attention when it’s located near the top of a building.

These are just a few examples of how signage and building design can meld. Innovation makes an impression, and imaginative usage of signage as an integral part of built environments is one of many ways in which architectural signage can grab people’s attention and promote branding while also being both functional and aesthetically pleasing – usually, with big letters to boot. So is it architectural signage, or is it building design? The answer: it’s both.

Communicating with the Functionally Illiterate in Public Spaces

According to a recent report published by the National Institute[...]

It may seem like architectural signage and commercial signage are[...]