As medical treatment for elderly patients has evolved, so too has the quality of life for those living in assisted care facilities. Long gone are the days of architectural firms developing sterile assisted care environments devoid of character. Now, comfort and security are the driving forces behind the modern construction of such facilities. Because of the special set of circumstances involved in caring for the elderly, wayfinding for assisted living facilities extends far beyond the scope of signage to include basic concerns like layout and design. 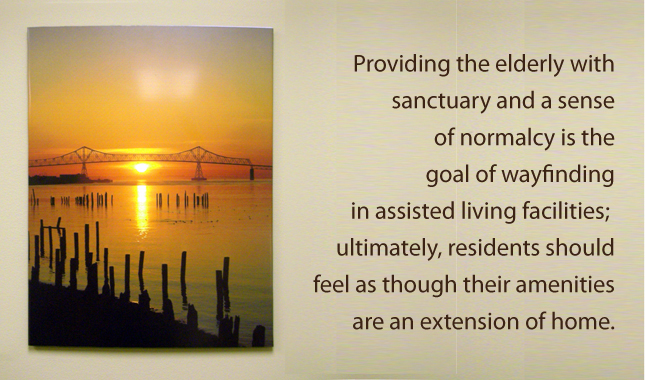 Entire floor plans must be conceived with the navigational ease of the residents in mind. Also, a variety of visual cues should be placed into the proper spots so as to ensure spatial recognition. Everything should work together as a highly functional system so that the needs of residents afflicted with physical and mental limitations are completely accounted for. Providing these people with sanctuary and a sense of normalcy is the goal of wayfinding in assisted living facilities; ultimately, residents should feel as though their amenities are an extension of home.  In the following sections, we will explore a range of features that can be used in order to achieve these objectives.

Before focusing on signage, general design principles must first be taken into consideration. Long, straight hallways with few turns – if any – are best for minimizing confusion for residents with memory issues. Inserting clearly defined segments at regular intervals will also help in this regard. The width of passageways is important, as well, as movement is difficult in confined spaces, especially for people with physical ailments. Recessed doorways to rooms allow for decorations and signifiers, but they also keep pathways free of clutter. While maintaining functionality is the primary task of developers, their plans should also promote social interaction among residents. For example, a facility that offers its residents ample seating in common areas will increase the chance of conversation, which can lead to improved cognitive functioning.

Several studies that have been conducted have shown that elderly people suffering from dementia react more positively to landmarks than they do to directions. These findings have a direct and major impact on wayfinding systems for assisted care facilities.  In addition to traditional architectural signage, visual indicators should be incorporated into building designs so that residents have concrete points of reference for where they are at any given moment. While mirrors should be avoided because they distort the appearance and actual size of objects indoors, these cues can be something as simple as a painting on a wall or a plant in the corner. However, they should always be prominently displayed, particularly at the intersection of hallways, where directional decisions must be made. The ability to make associations with landmarks is particularly useful in these situations. In outdoor areas, a centralized gathering place will serve the same role.

As people age, their eyesight often declines. As a result, proper indoor lighting is crucial for orientation purposes in assisted living facilities.  Though it might seem obvious that good lighting makes navigation easier, it also is known to stimulate brain function in dementia patients. Lighting fixtures serve a dual purpose, as well: they can be used like other indicators to delineate sections of a building. Conversely, outdoor areas should provide ample shade for residents with sensitivity to light.

Color, too, plays an important part in helping residents move around with confidence.  It is difficult to distinguish individual features in facilities that are painted in muted tones.  Even worse are buildings in which all planes are painted a brilliant white, as this can severely limit depth perception.  The best option for a color scheme is one of medium contrast, in which the walls and floors feature soothing, alternating hues.  This will benefit everyone who enters the facility, from staff and visitors to those with poor or diminished vision.

Signage, while a secondary concern in assisted care facilities, is still integral to wayfinding systems in these locations, as it can work in tandem with visual indicators to effectively direct residents. For instance, many medical professionals recommend adding pictures to accompany simply worded instructions, as they can be yet another way to trigger memory in residents.

Using large block lettering for displays is a best practice, and language free of jargon and catchphrases will guarantee that no information gets lost in translation. Combining all of these wayfinding aspects into a singular, organized and efficient system will go a long way in improving residents’ overall standard of living.

To see good examples of how wayfinding plans and architectural signage are used in assisted living facilities, click on the following links:

For more information about our work in providing signage solutions to healthcare facilities, please click here.

Sometimes, it's just fun to look at how routed letters[...]

Uptight Wayfinding: Getting to Where You Want to Go When You are Directionally Challenged

Since we launched Conversations about Signage, we’ve received a few[...]

Because most hospitals have been around for several decades and[...]