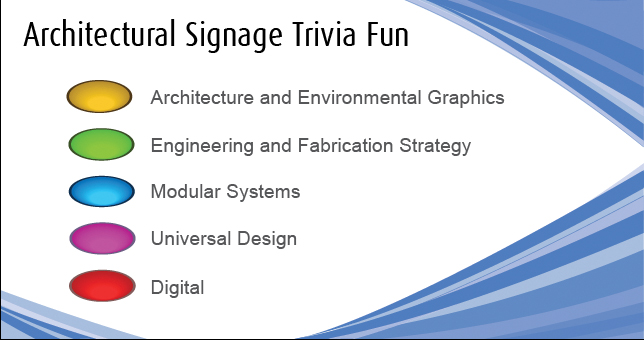 Although universal design is indirectly influenced by the ADA, there’s no direct correlation between the two. So what exactly does the new ADA Guidelines entail and how does it relate to signage?

Drafted into law in 1990, the ADA was sanctioned to protect the basic civil rights of disabled Americans. In addition to several other rules, the measure established requirements for the planning, construction and remodeling of a wide variety of public and private structures, including architectural signage. Because so many issues arose in the 20 years since it was enacted, the U.S. Department of Justice was prompted to amend the ADA in 2010 to reflect those concerns.  The reason that this change is noteworthy now is because, as of March 15, 2012, all new construction project and rennovations are federally mandated to comply with the latest guidelines.

Of the ADA’s five provisions, Title II and Title III were particularly affected by the new policies. While Title II prohibits discrimination with regard to both public services and transportation provided by local and state governments, Title III covers all public accommodations and commercial facilities, and it also extends to architectural signage. Though certain institutions like churches and private clubs are excused from adhering to the statute, virtually all other public buildings fall under this classification. This means that everything from hotels and restaurants to schools and hospitals – and everything in between – are now required to abide by the 2010 ruling.

Along the same lines, there are three main types of architectural signage affected by the new rules:

Almost all displays that you encounter in the public domain fall under the umbrella of one of these three categories. Also, every kind of signage solution, whether it is exterior, interior or wayfinding, fits this description. There are, however, some signs that are excluded from the ruling. These exceptions comprise a fourth group and include examples such as address indicators and temporary signs used for a week or less. While important, these types of signs are less likely to impact people’s mobility or the exchange of information.

Guidelines for ada signs vary depending on size, location and type, but there are minimum requirements for each kind:

The rules governing permanent displays are the most comprehensive and the least flexible due to the stability and long-term reach of that particular kind of signage. Conversely, because the point of signage is to clearly and efficiently relay information, finish and contrast are important design concepts for all three kinds. You can access specific measurements and regulations regarding signage guidelines, as well as more detailed information concerning these points by clicking here.

As you enjoy your morning coffee or munch on your[...]

If any place could be considered a melting pot of[...]