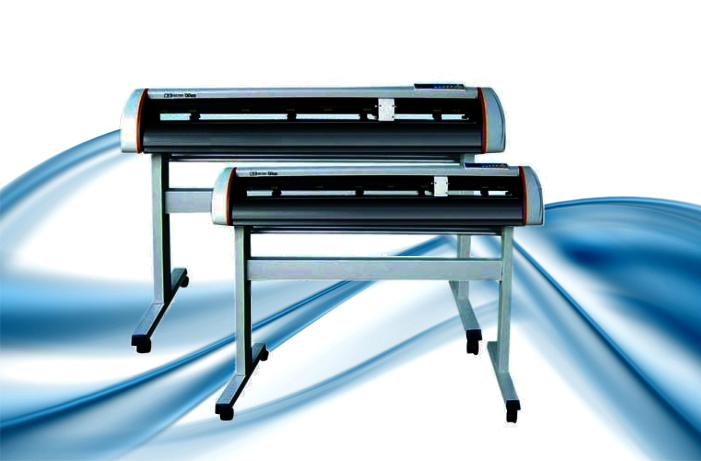 or The Past Shape of the Future

I first glimpsed the future of the sign industry after climbing into the back of a van sometime during the summer of 1983.
I was a new Design Director in Bay Area, at the time. The local sign supply house brought a new Gerber-IVB over, dragged an extension cord inside the shop and fired it up.
The gadget was pretty basic looking, as you see in a catalog pic from the time: 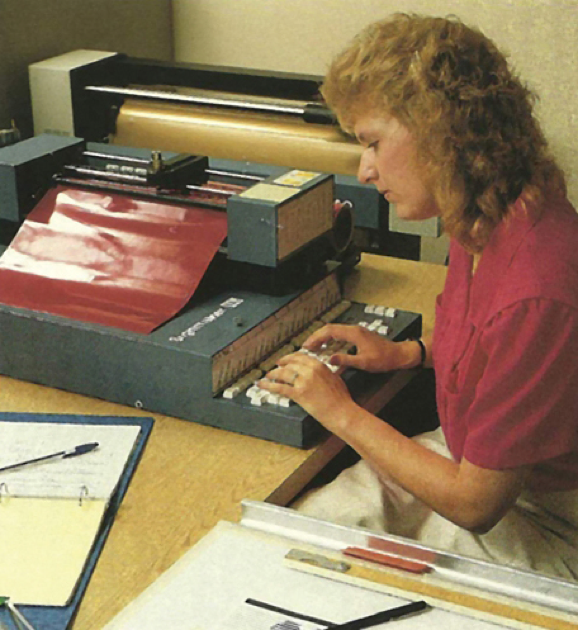 The old time sign painters just shook their heads and declared it to be the greatest abomination ever invented. In a few years, though, none of those guys were still around.
The crude metal shell hid pretty sophisticated and long-wearing machinery. There’s a chance one is gathering dust in your own shop.
With it, there was no such thing as loading a file and letting it rip. Nope, you had to keyboard one of the 12 proprietary fonts, each more crudely designed and letter-spaced than the other. A horrific version of Helvetica came with the machine but you had to buy others as plug-in font cards. To boot, this was the first time you could curve, squash or expand lines to fit, which led to all manner of text never before seen in nature.
Remember, Apple didn’t introduce the first Mac until 1983-84 and with it, the beginnings of a wide spread appreciation of type. Up to then, typography was specialized knowledge common only to professional art directors, sign painters and typesetters.
I contend the personal computer (especially the Mac) and the Gerber-IVB produced the first great disruption in the sign industry in hundreds of years. Before then, a lettering brush was the primary tool.
The groundwork had been laid a few years before by the introduction of what many grey heads still call Vinyl Die-Cut Letters.
3M produced self-adhesive vinyl sheet early on. Several manufacturers adapted the print finishing technique of die-cutting. They used old, sheet-fed letterpress equipment to cut individual characters, one at a time, at a pretty quick rate. Our pre-punched paper supplier still uses similar equipment.
One supplier in particular, Simple Space-Rite of Phoenix, still in existence, was critical to the development of our exterior fiberglass line. 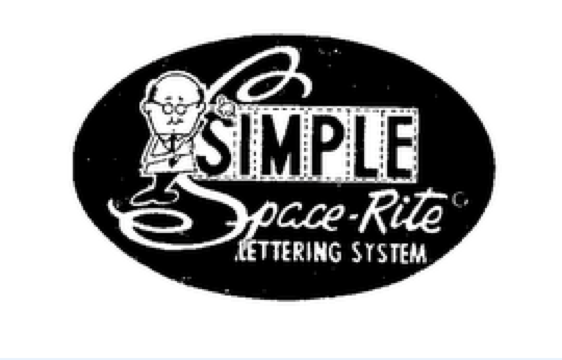 We would order just the characters they needed, this time cut from low-tack frisket material and pre-spaced on slick paper tiles. They were laid out on the fiberglass sign after painting with the graphics color. Then, after applying the background color, the letters were peeled off leaving correct and defined letterforms. A Matthews Paint matte topcoat over all and the result was integral, subsurface graphics far better than hand-cut or even Gerber output could provide.
In fact, the accuracy of the type-forms on our exterior signs was one of the selling points to designers then and a justification for a higher price than just about any other exterior sign at the time.
Another justification for the high price was (and still is) the amount of skilled handwork involved in their production. That, along with improvements in the vinyl itself, led to its long, slow decline in popularity beginning during a sharp economic downturn in the late ‘80’s.
Coming forward a few years, it wasn’t until the early 1990’s there were utility programs allowing virtually any file from Adobe Illustrator or CorelDraw to drive cutters. And, frankly, it wasn’t until a bit later dependable vinyl sheet appeared that didn’t shrink after a time, leaving behind a nasty adhesive and dirt halo.
Now, we cut and install vinyl with impunity in many different flavors. It wasn’t always this easy. 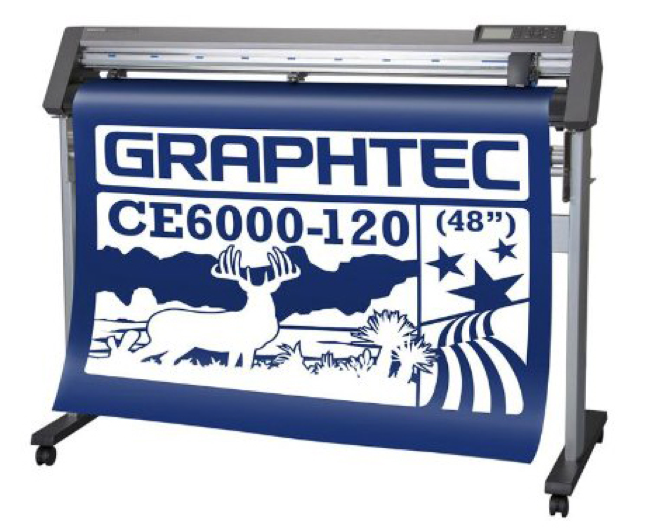 So what can we learn from this trip down memory lane?

There’s no Sense in Fighting the March of Technology

It’s bigger than us all.

Between 1950 and 1995, the changes wrought in all the graphic arts industries were unprecedented. Gutenberg would have felt right at home in a graphic design studio in the early ‘50’s. He could have picked up familiar tools and produced designs with the best of them.
However, that familiarity would have been short lived. With the entry of photocomposition, Letraset transfer type and IBM electric typewriters, things changed rapidly. Whole rooms full of skilled workers retired, were laid off or, for a lucky few, retrained.
The same happened with sign painters. As soon as the Gerber and plotters took hold, they were gone too.
The only way to survive using traditional techniques would be to reinvent and market yourself as an “artist,” practicing an arcane art for a select few. The meat and potatoes work went to new technology users who probably had no idea of their craft origins.
Many of the changes happened during economic downturns. Then, it made more sense to invest in machines than hire staff.
The best choice is to continually investigate and learn new technologies. Beware of those who either criticize on the basis of “quality” (technique only gets better as it matures).
An example: I’m just old enough to remember when phototypesetting, or “cold” output replaced hot lead (which had, in turn, replaced Guttenberg-like individual characters some 30 years before). I remember old timers railing against the newer typesetting that emerged from developer tanks as “just not the same quality.”
I remember when I moved to New York City in the early 1990’s and was amazed to find that the Macintosh and Desktop Publishing that was so common in Northern California, was derided by many New York designers “just not the same quality” as phototypesetting.
Some of these people were boyhood heroes of mine so, for a time, I believed them—at least until I realized what they were complaining about wasn’t type “quality” at all. In New York City, there was a robust support industry of phototypesetters who would, for a price passed on to the client, turn around typesetting in a couple of hours and messenger it back. The designer would then pour over galleys with an attitude of critical connoisseurship and mark them for another attempt at typographic perfection. This practice, although maddening for the night-shift typesetter, led to profitable overtime, cost overruns and, for a lucky few, the famed three-martini lunches.
In those halcyon days, all you needed in for capital investment as a graphic designer (or sign designer) was little more than a drawing table, a t-square and a triangle. An impressive office space (within bicycle messenger range of typesetters and photographers) could be the biggest expense.
Whether my grousing colleagues realized it or not, all that would come to a screeching halt with the entry of the Mac. All it took was another economic downturn and clients refused point blank to pay for endless typographic revisions, among other billable expenses.
All of a sudden, it became necessary to buy a Mac, a laser printer and expensive software like Quark and Adobe Illustrator. It became really expensive to be a designer. As a result, you’d be amazed at the fall-off in typographic quality during the transition. Equally interesting is how fast many designers deemed Mac typography, and their own meager operator skills, as “Just Fine.”
Never ending investment had reared its head graphic design and sign industries and hasn’t let up since. Resignation is the only rational response. It’s the price of success.

How is the Extreme Heat Affecting your Exterior Signage?

Having lived through the infamous summer of 1980 in the[...]

Directional Obstacles Those of us involved in the science[...]