Never Stop Wayfinding…Do it for Your Hippocampus!

Never Stop Wayfinding…Do it for Your Hippocampus! 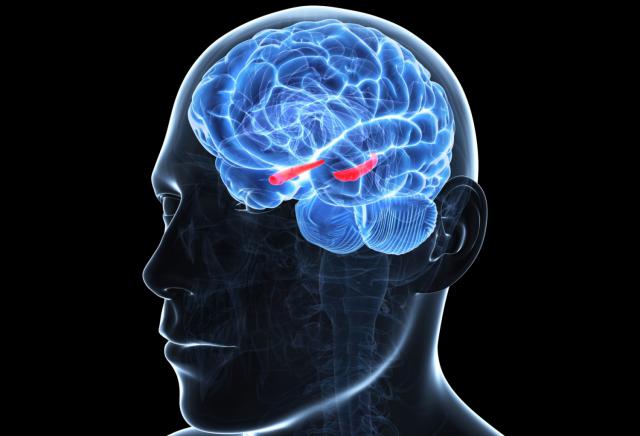 Over the course of my twelve years teaching within the signage industry, I have had the pleasure of learning many things about architectural signage including the thought, innovation, materials, design and craftsmanship that goes into producing beautiful yet functional signage solutions. For example, I learned and subsequently developed and taught topics related to wayfinding methodology, which has been a dominant organizational core competency throughout my company’s existence.

I recently ran across an article that explored the impact of technology overuse (ex. GPS) on the human brain, and low-and-behold, it led me to a wayfinding related topic that never really occurred to me: the exact part of the brain responsible for thought processes related to wayfinding…the Hippocampus! 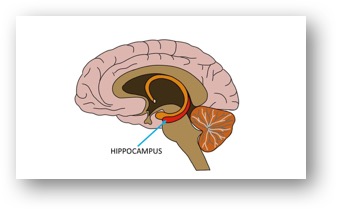 The name Hippocampus is actually based on its resemblance to a seahorse, from the Greek word hippokampus (hippos = “horse” and kampos = “sea monster”). If you were to pull the hippocampus out of a brain you would in fact see the resemblance (please do not try this at home): 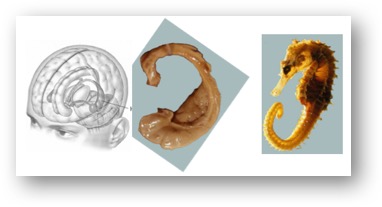 Not the most pleasant image, but now you have a visual reference for this discussion, so we’ll move on.

In addition to the belief that the hippocampus plays a role in forming brand new memories, neuroscientists also believe that the hippocampus controls our ability to navigate, form cognitive maps and spatially orient ourselves, all of which are primary elements of wayfinding processes.

It’s fascinating to better understand where wayfinding takes place in the brain, especially considering that the term wayfinding is still in its relative infancy. Kevin Lynch gets credit for first coining the term wayfinding in his book The Image of the City (1960), in which he writes about his findings from a five-year study of three cities, tracking how people navigated through a city using elements such as travel paths, districts, intersections and landmarks. Romedi Passini and Paul Arthur co-authored Wayfinding: People, Signs and Architecture (1992) to further articulate wayfinding as a spatial problem solving process, including more elements than signage alone, ex. the processes of formulating an action plan to navigate toward the desired destination and then implementing the plan.

If we were to describe how humans typically think when working toward a destination, in the form of a flow diagram, this is one way to represent the process: 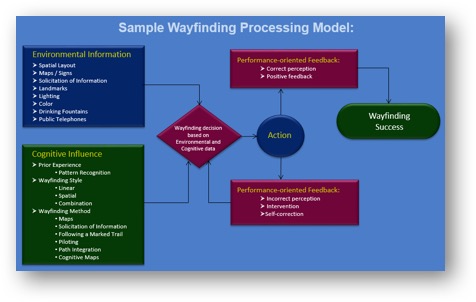 This sample model is consistent with the findings of Lynch, Passini and Arthur, and as noted, the hippocampus supervises these thought processes.

Here’s a summary of what basically happens in the above diagram (moving left-to-right):

And we now know that all of the above happens under the guidance of our friend the hippocampus!

Going back to the earlier technology/GPS reference to the hippocampus, I researched a number of articles that referenced the same well-known study published in 2000, in which it was found that London taxi drivers had a larger (with more gray matter) hippocampus than non-taxi drivers. It was concluded that taxi drivers had a larger hippocampus because they were constantly building cognitive maps along with their vast knowledge of the layout of the city. So, one can conclude that those who constantly think through wayfinding challenges can build and maintain a stronger memory and navigational skills.

On the other hand, there’s not enough evidence to firmly conclude that reliance on technology, such as GPS, will contribute to atrophy of the hippocampus. However, studies have indicated that we should understand the possibility that over-reliance of technology, including not using our God-given abilities to consistently build cognitive maps, spatially orient ourselves and make full use of our memory, could result in diminished cognitive and memory functions later in life.

As both a wayfinding provider and user, I enjoy the challenge of solving spatial problems with my mind, while appreciating technology that has bailed me out at as well. Wayfinding technology continues to evolve and we should embrace and consider new technologies that make life easier, more efficient and safer. Perhaps moderation, as with most things in life, is a reasonable approach that enables us to rely on technology as needed, but encourages us to use our minds and spatially solve our problems consistently and as often as possible.

So, get out there and give your hippocampus a regular and challenging wayfinding workout, it may very well thank you for it! 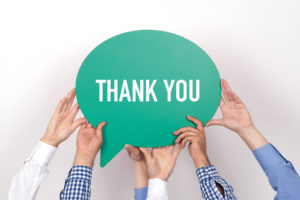 Thankful For Our Clients

To our clients, thank you. Thank you for trusting us[...]

Now that summer has arrived, let's talk about solar power.[...]