Almost daily on blogs and sites such as LinkedIn, you may see little cartoons or words which refer to bad bosses and bad management.

Lack of Clear Organization. When a person has known duties and corresponding authority he can develop a pride in his work, a recognized status, and a sense on inner security. By NOT making clear the role of staff, management creates confusion and perhaps conflicting obligations which is bad for morale.

Lack of Consistency and Fairness. Inconsistent treatment by a manager can anger people to a point where they become disgusted with their entire job. Even more important than consistency over time is fairness of treatment among subordinates. Unfairness can quickly reduce voluntary cooperation to zero.

Not Matching Individuals well with Jobs. A person’s feelings about his/her work always depends on whether his job is suited to his/her abilities. Very often people are hired without that person having the skills or desire to do that job and that ultimately sets the hire up for failure.

Propagating a Prolonged Period for Settlement of Grievances. Any grievance by an employee, however small it may seem, becomes a source of annoyance unless and until settled. Many time managers will avoid addressing grievances either because they feel that it is insignificant or because the manager himself is averse to handling conflict and avoids dealing with the issue. This results in a loss of trust and faith in the leader by the staff member affected.

Law of the Situation. Whenever possible, a manager should let the facts of a situation tell his subordinates what should be done – and not say, “Do this because I tell you to”. A manager may in the end decide precisely what is to be done, but the need for action is accepted by subordinates not because he says so, but because they recognize an objective to be met. When people respond to a situation rather than to an order, it gives them a sense of self expression.

Not Formulating Sound Objectives. To create personal satisfactions, broad goals should be translated into specific aims that are meaningful to each employee and then reasonable levels of achievement should be agreed upon. Not communicating specific goals and acceptable achievement levels diminishes the element of cooperation by staff and give them a diminished sense of accomplishment. 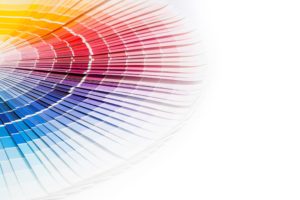 Pantone is the most important color matching system in the[...]

Although universal design is indirectly influenced by the ADA, there’s[...]

“I think that I shall never see/a signpost lovely as[...]