Libraries for a Smarter Future

Dayton Metro Library (DML) launched a massive building plan as part of the Libraries for a Smarter Future. The system-wide facilities improvement project was made possible by Montgomery County voter support of a $187 million bond issue in 2012.

The Dayton Metro Library selected the Dayton Design Collaborative – a partnership among LWC, Levin Porter, and Ruetschle – to be the Architect of Record for the first segment of its facilities plan. John Poe Architects was pre-qualified for consideration and subsequently awarded design projects as well.

The ASI, Dayton story begins 2 years before the project was publicly bid and subsequently awarded to ASI when Ruetschle was tasked with designing the interior and exterior signs in addition to their work to design branches. The project was split into three building segments. Building segments 1 and 2 consisting of nine branches were completed in 2017. ASI needed to bid the final building segment in the Spring of 2018.  This final segment runs through 2020 and again, ASI was the lowest bidder and awarded the final segment that includes 8 more branches.

Working closely with Ruetschle on design concepts, ASI helped develop the basis of design for both the interior ADA signs and exterior branding – channel letters (halo and face lit), and ground monuments with routed push through acrylic letters and logos. The Main Library Downtown was in the first segment and as such, wanted to thank the county and the individual donors for supporting the campaign.  The individuals and company donors were recognized as Founding Members of the 1888 Society (the year the DML was founded). Every donor who pledged $1,888, was honored on a permanent wall in the Main Library’s beautiful, new atrium. This wall is designed as an artistic, contemporary bookshelf, with donor names as the title of a book, each with their own call number. 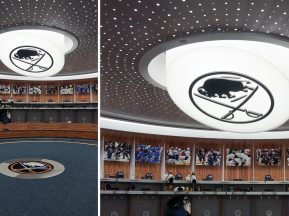 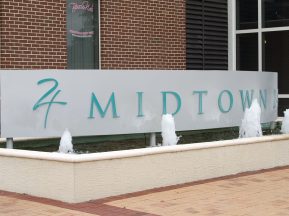 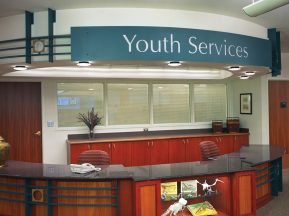 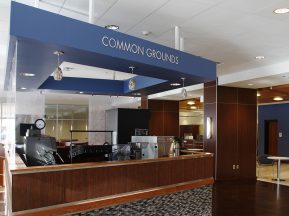